Thank you for visiting this page! My name is Casey Butner, and I hope to meet you face to face someday. God has called me to serve Him at Beulah Baptist Church, and we are excited to be a part of His work in the western part of Orlando. My lovely bride, Christy, is the best, and we have four children. Their names all start with “A” so we affectionately call them our “A-team.” Please come see us some Sunday. We look forward to meeting new people!

You might want to know some of my background? Well, after 10 years of owning a business, God called me to preach! I sold it all for His call on my life! From there God guided me to earn an associate degree in preaching from Fruitland Baptist Bible College, a bachelor’s in ministry from The Baptist College of Florida, a master’s in theology from New Orleans Baptist Theological Seminary, and a doctorate with a concentration on Pastoral Leadership.

Come by or email anytime
pastorcasey@beulahbaptistwg.org 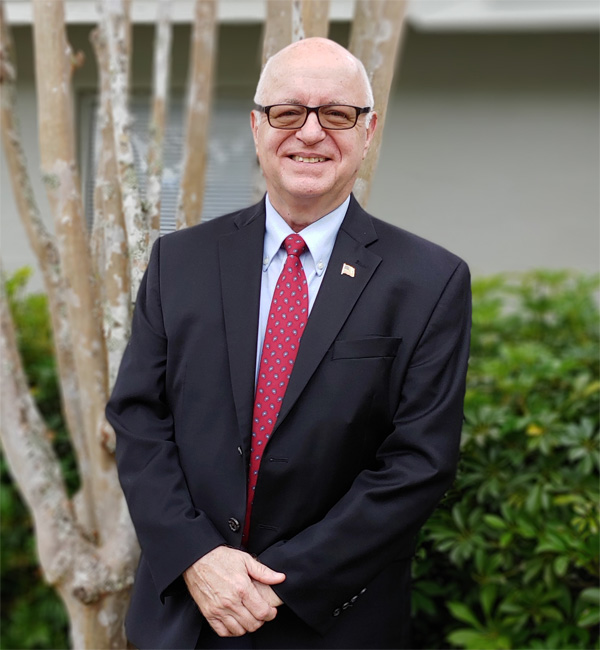 Blessed to have been raised in a Christian home by Godly parents, Dennis accepted Christ at an early age. He met the love of his life, Debra Boatwright, in youth group and they later married. Following a four year tour of duty in the USAF, Dennis and Debra return to their home church, Antioch Baptist Church in Riverdale, Georgia, and began serving God. It was not long before he received the call to ministry and left to attend Tennessee Temple Bible College in Chattanooga, Tennessee. Prior to graduation, he returned home to become Associate Pastor, having been ordained on February 4, 1979.

Later, while employed by Delta Air Lines, Pastor Dennis served in a bi-vocational position at Heatherwood Baptist Church in Riverdale, Georgia for a total of 15 years. Pastor Smith served in various positions including Minister of Outreach and Evangelism and Children’s Minister. During that time, he shared in the preaching rotation and established a second church location south of the original campus. Then, he was called as a bi-vocational pastor to two different small rural churches in Lifsey Springs, and Senoia, Georgia. While he served as bi-vocational pastor, the Smiths also owned and operated a Christian bookstore in Newnan, Georgia.

Following his years of ministry in Georgia, the Smiths moved to the Orlando area. They attended Orlando First Baptist Church and began teaching in the Small Groups Ministry. In 2020, desiring to serve God in a location closer to their home, Dennis and Deb found Beulah Baptist Church. Dennis and Debra have two sons, Jason and Joshua, who have blessed them with six grandchildren and one great grandson!

“From the first visit, we immediately felt completely at home. Retiring from a secular career in September 2020, it has been our blessing and privilege now to spend more time in ministry opportunities at Beulah Baptist Church.”

Since receiving Jesus Christ as Savior at the age of 16, Jimmy was mentored by some truly gifted and passionate believers. His first solo as a new believer was the Gaither song, “He Touched Me”, delivered during a Wednesday night Bible Study. Since that day, his life was never the same. Through years of experiencing both trials and blessings, he shared his faith in the One who saved him, kept him, and promised to finish the work He began. He chose to use the gifts God gave him to help lead Believers into a closer walk with Christ. His personal goal is to lift up Jesus in every situation. His passion is to see Jesus touch the lives of every believer through worship. Then His people will be able to touch and reach those who do not know the Savior, Jesus Christ. Jimmy believes that true worship begins in the heart of every child of God and is expressed in various ways through private and corporate acts. Worship can be singing, serving, giving, reading God’s word, or sharing faith with others. God placed a song in Jimmy’s heart that remains with him and drives him to say, ‘It Is Well with My Soul”. Let’s join our hearts in worship and sing that song together, to the glory of God.

Barbara is the secretary for Beulah Baptist Church. She also serves on the hospitality committee and enjoys singing in the choir. She loves the Lord and believes her gift is serving. Barbara is a native Floridian who was born and raised in Orlando. After graduating from Boone High School, she went to work for an automotive dealership where she met and married her amazing husband of 52 years. These days Barbara and her husband love spending time at the beach. They have two children and two grandchildren. Prior to becoming a church secretary, Barbara and her husband owned a commercial cleaning business for forty years. After closing the company, she became the secretary for Powers Drive Baptist Church of where she was a member for 35 years. After Powers Drive Baptist Church and Beulah Baptist united, Barbara continued to serve under Pastor Casey. Her favorite scripture is Romans 8:28

Rick was saved at the age of 12 years old at Faith Church of the Nazarene, in Ft. Lauderdale. His story is a little unusual, as Rick recalls "I don't read music but started playing the piano shortly after becoming a member of a Southern Gospel Group. While playing the guitar in the group, I would stand by the piano and watch the pianist. That pianist became my mentor, teacher and life long friend." Since, Rick has played for several gospel quartets. Outside the church, he began a law enforcement career in 1982. Rick says "I enjoy every minute of serving and protecting while in the motorcycle division". Rick is happily married to Brandy and has five grown children and three cherished grandchildren. "I love sharing the Gospel through music. One of my favorite hymns is Victory In Jesus and I feel very blessed to have found a home at Beulah Baptist Church" he says.

Although Nelson Fernandez was born in Puerto Rico and raised in Ohio, he is a long-time resident of Winter Garden. He has been happily married to his beautiful wife, Gloria, for 32 years. Together they have raised five children and been blessed with four grandchildren. Before coming to work at Beulah, Nelson worked for Golden Pond Nursing Home Facility for seven years. In his spare time, Nelson enjoys DIY projects at home and working on his acreage in Levy County. Nelson received Christ on November 20, 2004, and so sharing the love of Jesus with others is very important to him. He and Gloria enjoy “sidewalk evangelism”. Simply put, they go for walks in the neighborhood and share the Gospel with anyone they encounter. We are so blessed to have Nelson on our team!